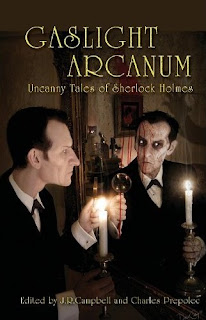 "The Comfort of the Seine" by Stephen Volk
"The Adventure of Lucifer’s Footprints" by Christopher Fowler ﻿
"The Deadly Sin of Sherlock Holmes" by Tom English
"The Colour that Came to Chiswick" by William Meikle
"A Country Death" by Simon K. Unsworth
"From the Tree of Time" by Fred Saberhagen
"Sherlock Holmes and the Diving Bell" by Simon Clark
"The Executioner" by Lawrence C. Connolly
"Sherlock Holmes and the Great Game" by Kevin Cockle
"The Greatest Mystery" by Paul Kane
"The House of Blood" by Tony Richards
"The Adventure of the Six Maledictions" by Kim Newman

Writer's Quote:
"A trusty comrade is always of use; and a chronicler still more so."

Writer Gregory L. Norris and editor Tom English discuss the impact of daytime soaps on story-telling and the horror genre

Read my Intro to the 1st Tom Corbett novel.

By day Tom English is an environmental chemist. By night he writes fantastic stories both weird and wonderful. His first published story was selected for Horror: The Best of the Year, 2008. Since then his work has appeared in such magazines as Weirdbook and Black Infinity, and several anthologies including Haunted House Short Stories, Gaslight Arcanum: Uncanny Tales of Sherlock Holmes, Challenger Unbound and Dead Souls. Tom also edited the mammoth anthology Bound for Evil: Curious Tales of Books Gone Bad, which was a Shirley Jackson Award finalist for 2008. He currently helms the eerie SF magabook Black Infinity. He resides with his wife, Wilma, surrounded by books and beasts, deep in the woods of New Kent, Virginia.

My story "The Deadly Sin of Sherlock Holmes" appears here:

is a mammoth anthology edited by Tom English, and featuring Ramsey Campbell, Fred Chappell, Rhys Hughes, Jeffrey Thomas, H.P. Lovecraft and dozens of others! The book was a Shirley Jackson Award finalist for Best Anthology of 2008.